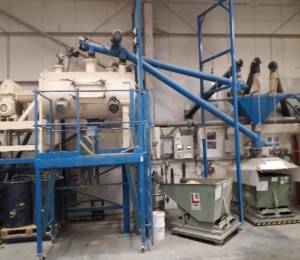 A leading North West based manufacturer of technical mortars and high-performance coatings, specialising in concrete repair and protection products has invested in an automated recipe batching weigh system in association with Applied Weighing International Ltd.

The new system has enabled the end user to reduce downtime and implement a more efficient process and safer working system for its employees. Previously, the process was very manual labour intensive and extra safety measures had to be put in place to protect the health and safety of the operators.

The customer had previously contacted other weighing service providers to produce a solution to meet their requirements, but they eventually chose Applied Weighing international Ltd. The decision to go with Applied Weighing was based on “The reliable, excellent service and backup that Applied Weighing have provided over the last few years” according the site Business Manager – Quality & Continual Improvements.

The 920i recipe batching weigh system has had bespoke software programme designed and implemented by Applied Weighing software team. Not only does the 920i system provide a look up table of 100 different ingredients which can be selected, there are also 20 built in recipes that can be edited to suit the customers requirements. The software programme also displays mimic weight values for 3 off feeder silos which do not have any form of weighing device installed on them. All individual weight transactions are also recorded to an in-line printer which also displays the date/time/operator.

The new system has not only dramatically increased production output but reduced man hours requirements and increased safety. The customer plans to introduce a second system in the near future.

View all News
Products
Servicing & Calibration
Industries
Get in Touch